All coins have two sides. Where at one end of the spectrum, according to UNESCO, around 57 million children do not attend school, on the other end, there are hundreds of children living in the most remote corners of the planet, who risk their lives in the most unimaginable fashion to go to school. Here are 10 life-threatening journeys made by kids to go to school: 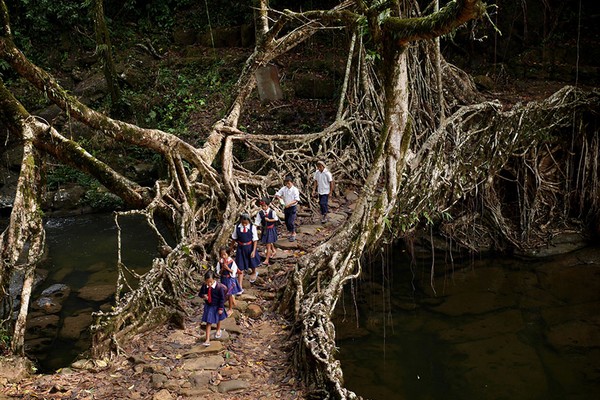 Known as one of the wettest place in the world, receiving 467 inches of rain each year. Labours are said to work in fields wearing practically full body umbrella made with banana and bamboo leaves. Over the years, locals in and around the village of Mawsynram has been training the roots of rubber trees to grow into natural bridges which is sometimes referred to as ‘living bridges’. They even outlast made-made wooden bridges. The Kashi children of the RCLP School cross the roaring river from over these root bridges every day. They’ve also got ‘living ladders’ that they manipulate into a curve so that it assists the villagers to descend down the hill. 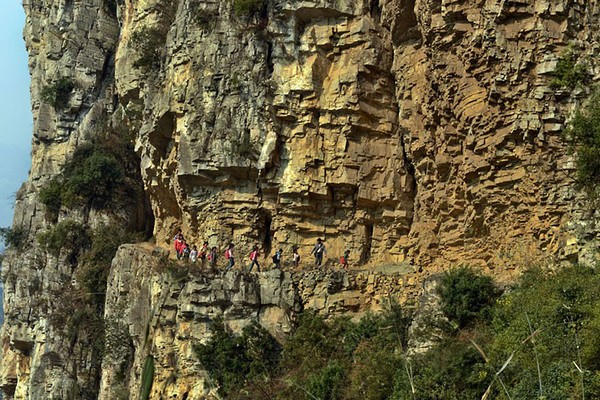 The mountainous village of Gulu is located in the remote overhanging cliff of Dadu River Canyon. The people are said to belong to the Yi ethnic group. For the children of the village, the road to school is through dangerous zigzag pathways along the overhanging cliff. The Elementary School is one of the best constructed buildings in the entire village. They have even made a basketball court at an empty space in front of the school. The boys play there without a basketball net so they don’t shoot, because the ball may roll down the mountains and they might lose it forever. 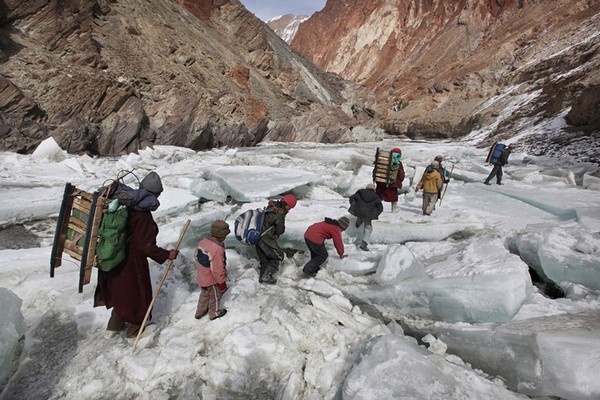 These keen school goers living among the Himalayan Mountains hike their way down to school. No big deal right? Except that the ice layers are sometimes thin and the children risk falling through them into the ice cold water underneath. And if that happens, cold shock will seize their little bodies. Not soon after hyperventilation will set in, the body would sink down, swallow water and die. The rugged icy ground is hard and often slippery. Toppling over them can cause fatal injuries, but the Children of Zanskar are undeterred in their journey to seek education. 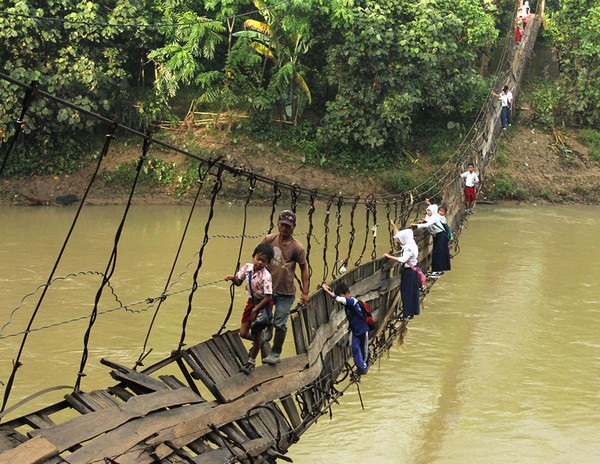 Children of the Indonesian village Sanghiang Tanjung living on the other side of the Ciberang River have to cross a broken suspended bridge every day, to reach to the other side where their school is located. There is another alternative bridge but that’ll require an extra 30 minutes’ walk to reach. So the children use the old bridge without any safety device at all. They walk slowly, sometimes screaming as their shoes slip. After the story of these brave-heart children taking perilous journey to go to school spread across the country, Indonesia’s largest steel producer, PT Krakatau Steel came forward and along with some NGOs built a new bridge for them. 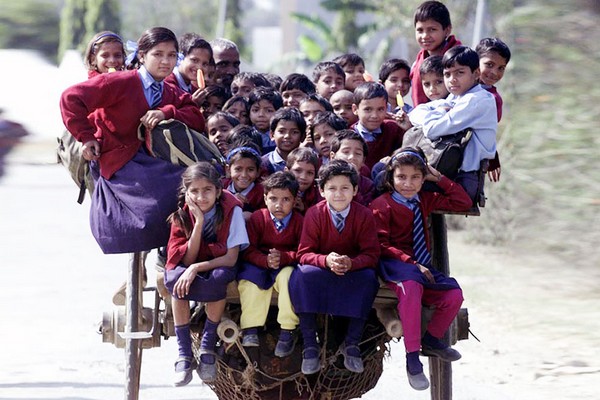 Recent census has revealed India to be the 2nd most populated country (after China) in the world with 1.2 billion people teeming over its land. United Nations estimates that India could overtake China in population by 2030. The shocking truth is that India’s population now nearly equals to the combined populations of Pakistan, Indonesia, Brazil, Bangladesh, Japan and the United States. And there seems to be no signs of slowing down. Overcrowded and under poverty, the plight of children are unimaginable. They suffer yet they study. In the above picture even the horse cart is overloaded with children retuning from school. A little tilt or lost balance can end up in grave disaster. 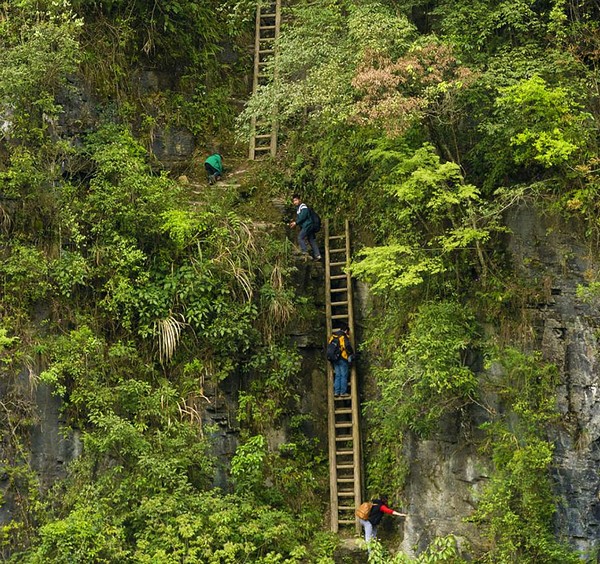 Here the children have to climb a number of narrow wooden ladders that seem completely unsecure in order to reach to the village school. These schoolchildren make the perilous journey on narrow wooden ladders every day, with no safety precautions what so ever. Zhang Jiawan Village is remotely located in the Badagong mountains and the terrain is characterized by drops in every side. The only other way of reaching the school is a cross-country detour that’ll require 4 hour. The parents though anxious want their children educated. Getting an education via a series of rickety-looking ladders is a struggle unlike any other. 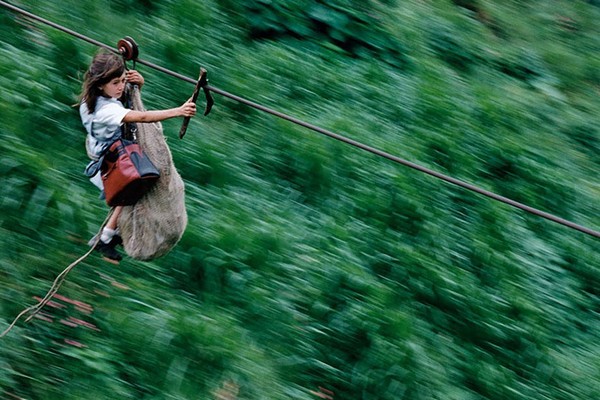 They zip across The Rio Negro River with the steel cables that connect one end of the valley to the other. 40 miles southeast of the capital Bogota, there lay a rainforest with only a few families residing in them. The steel cables are suspended 400m above the roaring river and are of 800 meters long. Photographer Christoph Otto took the picture of two siblings (Daisy Mora and her brother Jamid) zipping at a speed of 50 miles per hour in about a minute. Her little 5 years-old brother is actually inside the sack and both of them are attached to a pulley. The tool in her hand is a branch that is supposed to work like a primitive break. All this seems like a crude joke, except that it isn’t! 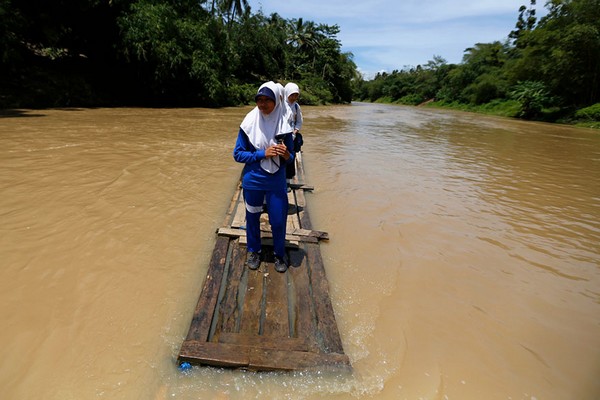 Ever since the bridge over the Ciherang River broke down the students are crossing it on makeshift bamboo rafts. When the authorities didn’t bother to build a new bridge the students were forced to find an alternative means of crossing the river to go to school. The bridge had actually collapsed during the floods in early 2013. And since then they have been commuting to school on those narrow fragile boats over the river which is popular among tourist for its whitewater rapids. 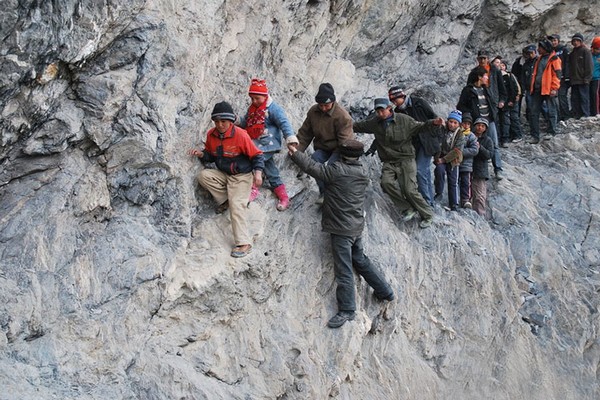 At the beginning of their term the school officials go to a very remote village to escort 80 school children of the villages on a life-threatening 125-mile journey through the mountains of the remote Xinjiang Uighur Autonomous Region. Some of the pathways are carved out from the steep sides of mountains and are only inches wide. It takes them two whole days to reach the boarding school. For which they have to cross four freezing rivers, a 650ft chain bridge and four scary single plank bridges. And all these, they do to get educated. 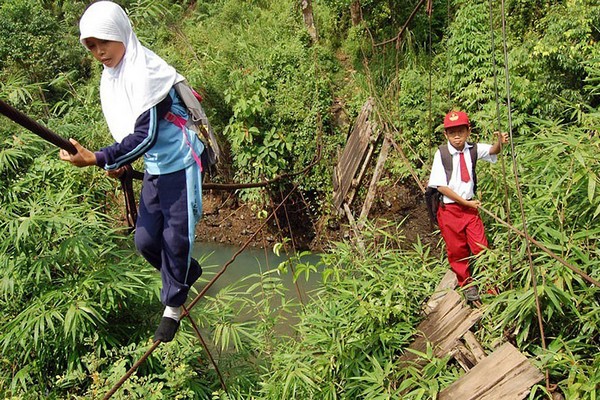 How on Earth do they get the courage to do this? That’s the first question that comes to mind when one looks at the picture of these strong-willed children slowly tightrope walk 30 feet above a flowing river. And following this walk, they go a further seven miles through the forest to their school in the town of Padang. These 20 Batu Busuk village pupils have been doing this most perilous balancing act holding steel wires since the last heavy rain destroyed the local bridge. These daredevils face injury even death by drowning, just to get to their class on time. They sometimes are accompanied by many of the parents and most of them are scared to cross the bridge during the rainy season for fear of being swept away by the river. But the lack of proper roads into the town forces these young ones to face death each day quiet in the literal sense.