The world’s full of abandoned buildings, houses and even entire towns! Whatever and wherever they are, they’re guaranteed to make our hairs stand on end!

From spine-chilling atmospheres to their eerie silence, they’re a ghost hunter and urban explorer’s dream! So, pluck up some courage up and check out these 16 abandoned places where things apparently go bump in the night.

1. The ghost town of Sanzhi in Taiwan 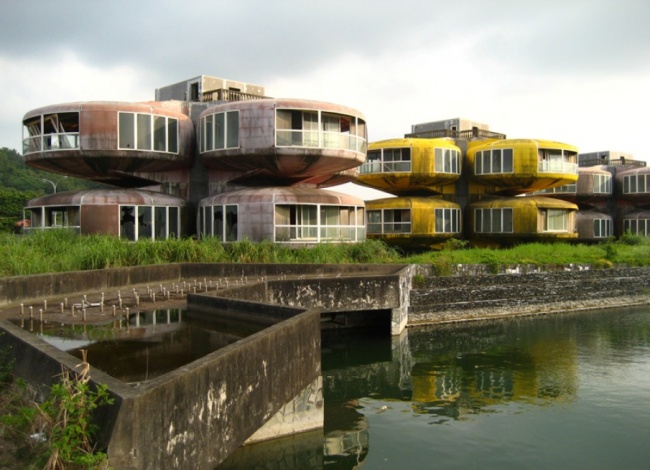 This was supposed to be a vacation town for richer members of society, but unfortunately the project never took off. Apparently weird things began to happen once construction work started. Dozens of workmen fell to their deaths from the roof, got crushed by cranes or lost their lives due to a lack of adequate security measures. Locals began to say it was cursed and haunted, whilst legends claims that innumerable Japanese were imprisoned and killed in this part of the country. After having witnessed so many tragedies, work was stopped at the end of the 80s and the apartments have since remained empty. The government has refused to tear the buildings down as they don’t want to upset the spirits that roam this site! This architecturally stunning hospital is in a town about 25 miles from the capital. It was used during both the First and Second World Wars and Adolph Hitler himself was treated there in 1916. The town was abandoned in 1995 and the hospital subsequently closed its doors. That said, a lot of hospital equipment remains and the building is now a spooky monument to the sick and dying.

3. The 8th plant of the ‘Dagdiesel’ in Makhachkala, Daghestan This test station for naval armament was commissioned in 1939. Its offshore location made construction difficult and it was abandoned shortly after it was put into operation, due to changes in test protocols. Sitting around a mile from the shore, you can still see its remains lurking above the Caspian Sea and from a distance it bears an uncanny resemblance to a Viking long ship.

4. The psychiatric hospital in Lier, Norway At only 30 minutes from Oslo, you’ll find the psychiatric hospital in Lier. Its history is intriguing and numerous patients reported strange things happening. In 1985, 4 buildings were suddenly evacuated and have since remained empty, without an explanation being given. What remains is still in good condition, including hospital logs and patients’ personal property – it’s almost as if people fled these buildings in a state of panic! As for the rest of the complex, out of the 12 original buildings, 8 remain in service today. 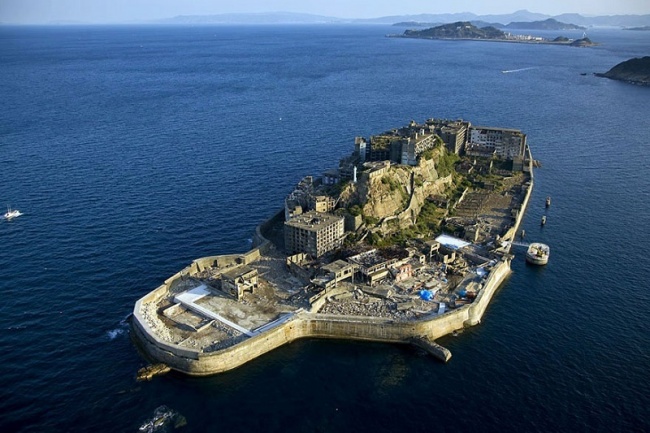 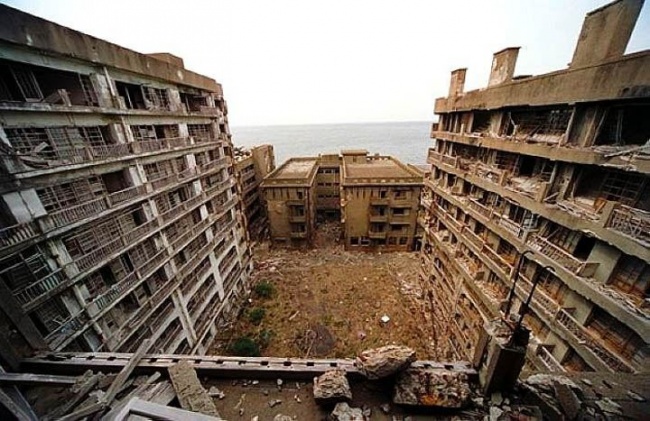 The original nickname of this forgotten world was Hashima, which means ‘battleship’ in English. The discovery of undersea coal deposits in 1810 led the government to construct huge buildings and accommodation blocks. Fifty years later it was the most densely populated island in Japan, with a staggering 5.300 habitants squeezed in to less than half a mile. By 1974 coal production had gone into decline and the island’s residents began to leave it shores. You can still reach it today and a number of sightseeing tours are available. But even if you don’t manage a visit, just ask Japanese people about its history – they’ll all have a disturbing tale to tell! 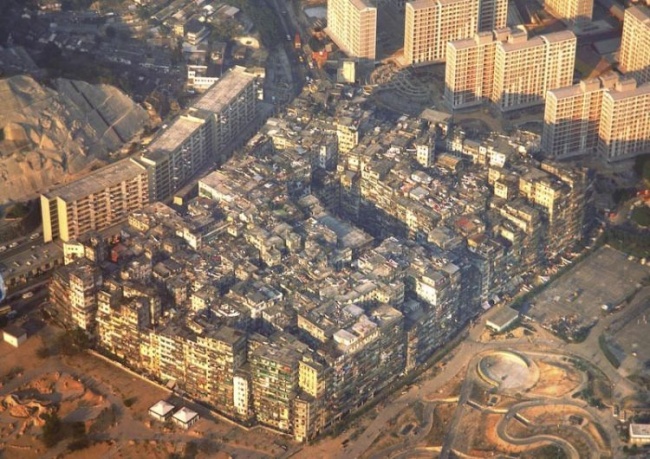 An example of communitarianism in the heart of a sprawling megalopoilis, the Kowloon walled city in Hong Kong was run by its residents and not by the Hong Kong government nor the Chinese once Hong Kong was handed back to its ‘current owners’. A type of governing body was set up between the city’s four walls, but this didn’t stop prostitution and drug trafficking from taking a hold. Economically, Kowloon was pretty self-sufficient thanks to a thriving noodle industry and other small businesses. The cost of living, however, was high as there were no taxes to support the system and work was hard to find. Kowloon also had its own hospital alongside elementary and secondary schools. By 1990, censuses estimated that the walled city had 1,255,000 inhabitants per square kilometer – one of the most densely populated areas on the planet. In 1995, the government gradually began to tear it down and turned it into a park. However, some buildings remain including its yamen building and southern entrance. Situated in San Antonio del Tequendama, this former luxury hotel was built 1924. Unfortunately it gained a reputation for more than the services it provided! It closed in the early 90’s due to supposed water contamination problems, but locals remain skeptical. Apparently the hotel was the scene of numerous suicides and many believe that this haunted building hides a terrible secret! In 1944, the Paricutin Volcano erupted and destroyed the town of San Juan Parangaricutiro, as well as most of its church. The church’s altar and clock tower remain intact, which is hard to explain given the force of the eruption. Creepy ruins apart, the views and surrounding forests are awesome.

9. The flooded city of Shicheng in China The submerged city of Shicheng (AKA Lion City) was built about 1,341 years ago, but met its fate with the construction of a hydroelectric station. The entire city was flooded leaving behind some amazing Tomb Raider-esque remains. A major dive attraction, this ‘Atlantis’ is surrounded by man-made lakes and around 1,078 small islands.

10. The Kolmanskop ghost town in Namibia Kolmanskop was founded thanks to the discovery of diamond mines and quickly became a thriving town with stunning houses, schools, a hospital and even a German-inspired sports stadium. Its future looked bright, but intensive mining meant diamond stocks ran out and the town’s residents began move away. It’s parched African climate and ferocious sand storms didn’t help and today you’ll find an abandoned town where most buildings are buried under several feet of sand. 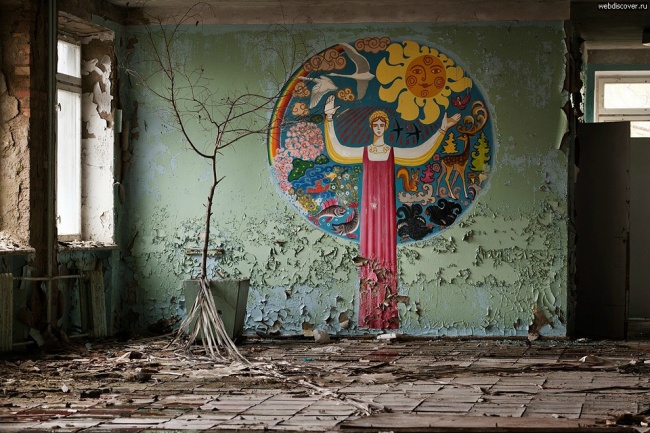 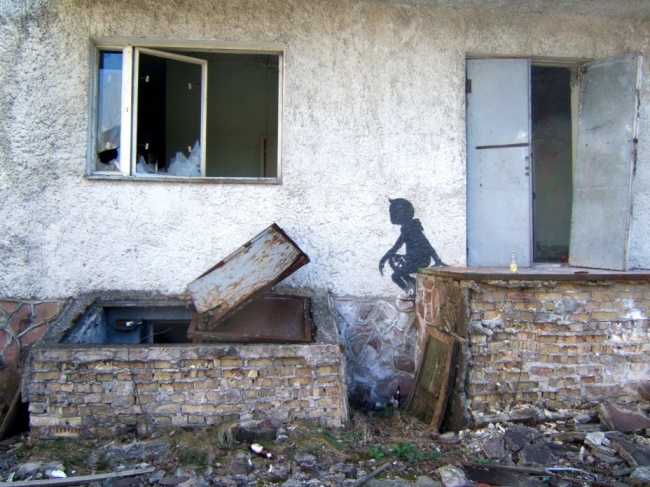 This abandoned town is only a couple of miles from Chernobyl. After the 1986 explosion, it became a horrifying reminder of nuclear destruction. You can go on guided tours around this ghost town, which according to local legend is said to house the souls of the departed. 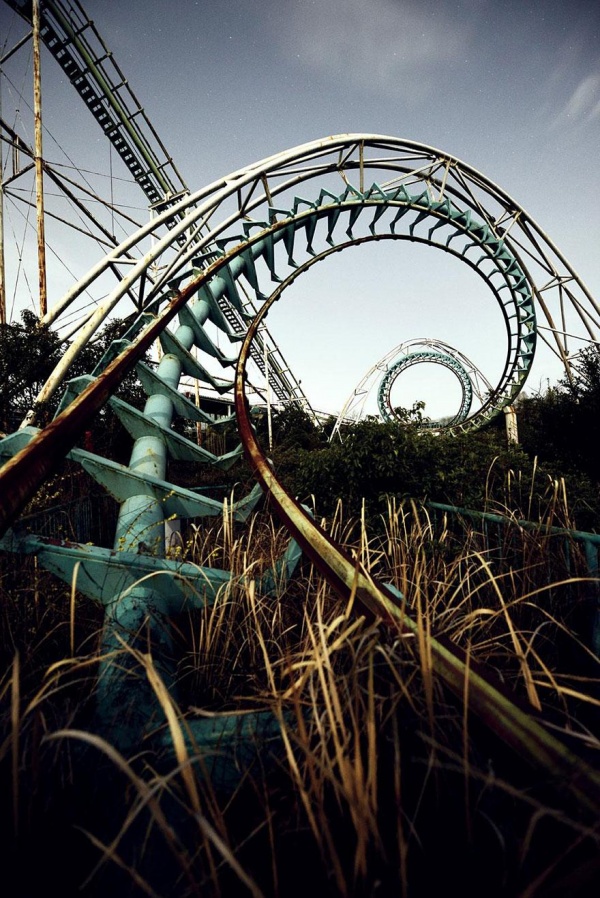 Opened in 1961, this Disney-inspired theme park closed in the 90’s due to a lack of visitor numbers, despite it having amazing rides: roller coasters, carousels, a castle, giant toboggans, video arcades etc. Why it failed to succeed is unknown and today it’s an eerie blend of ruins meet nature. That said, urban explorers have respected its remains and its structures remain pretty much graffiti-free.

13. Michigan Central Station in the USA 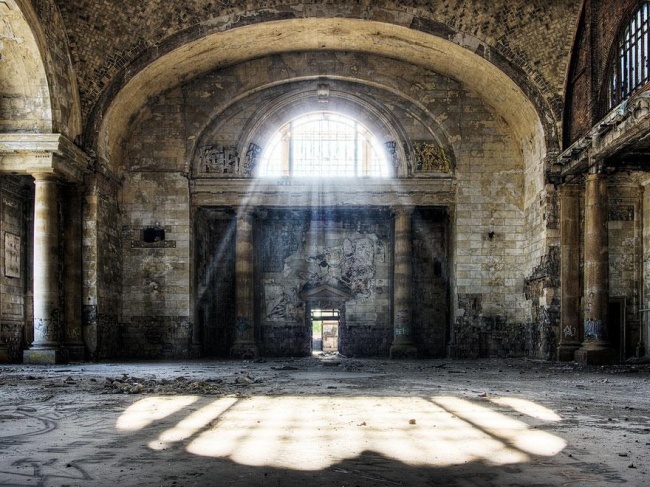 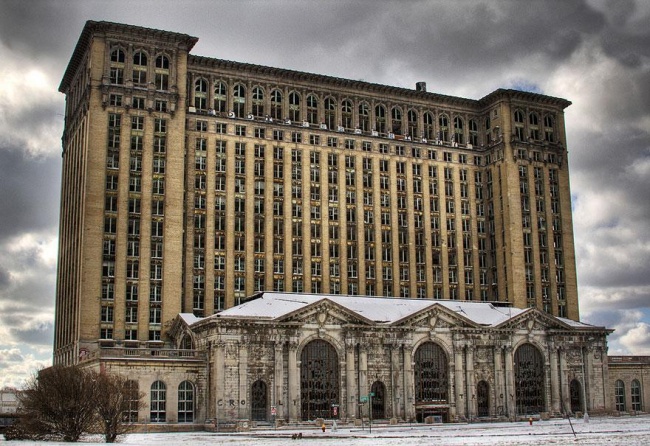 This architectural wonder was built in 1913 and became the hub of Michigan’s transport system. It was closed on January 5th 1988 due to lack of passenger traffic and this stunning station has since been slowing falling apart… 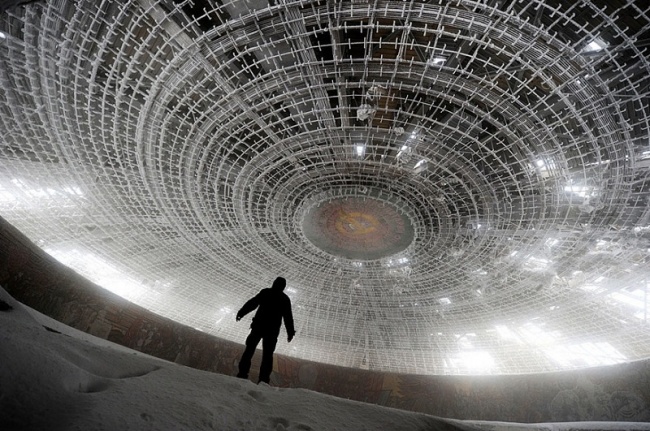 A mind-blowing UFO-type structure that was abandoned with the fall of Communism. From its ghostly acoustics to its immense size, this Orwellian building will give the most hardened ghost hunter the goosebumps! No, it’s not a submarine or ghost ship, but a Brazilian yacht that sank in Maxwell Bay, Ardley Cove. The Brazilians wanted to shoot a documentary about this fascinating wreck, but rough seas and Antarctica’s bitter climate prevented the crew from pursuing the project.

16. A plane stuck in Turkish waters This was a military transport plane used for Turkish troops during World War 2 that was intentionally sunk and not bombed by enemy forces. Why? To create a dive site! Nowadays its home to tropical fish and shellfish – an unusual marine paradise for any diving fans wishing to get off the aquatic beaten track!