Nowadays it’s so common to take several photos a day, thanks to the help of cutting-edge cameras on our cell phones. These cameras allow us to capture great shots without even having to have a background or education in photography. If you take a lot of photos, there is a good chance that you’ve discovered some interesting things in the backgrounds of the images. Sometimes it’s as simple as having a stranger in a busy restaurant photo-bombing you.
You may not know it at the time, but when you get home and take the time to actually look at the detail of the photo, you discover a random person hovering in the background.

While this can be downright creepy at times, there are other times when capturing strangers in the background turns out to be memorable and artistic and worthy of sharing with the rest of the world.

Forty-three-year-old Gavin Best is a lot like the rest of us. He pulls out his phone to snap photos when he sees a good opportunity. While walking with friends in Belfast on New Year’s Eve, Gavin snapped a photo of a rocky cliff that appeared to be a perfect lookout point for someone wanting to see the landscape below.

It seems like no big deal to take a photo of a beautiful landscape, but the really interesting part came out after Gavin got home. While going through his photos, he zoomed in on this particular one and he realized that he had captured a person jumping on top of the cliff. The stranger was in mid-air just as Gavin happened to be snapping the photo, which is a miracle by itself, considering professional photographers will spend hours trying to get that perfect shot.

“When I looked at the photos afterward on my mobile I didn’t spot anything; it was only a few days later when I was looking through the photos on my laptop that I noticed something over there, so I zoomed in,” said Gavin. “I thought it was a hell of a coincidence that I’d happened to capture that exact moment – I hadn’t even realized there was anyone over there when I took the picture. By pure chance the timing was perfect and it created a funny shot.” 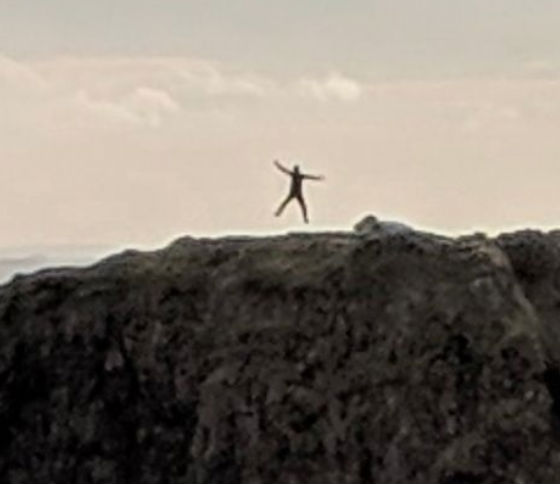 Gavin went on to post the photo on Twitter, and he has created quite a fan club of the photo, having already 1,200 likes.

“I posted the photo on Twitter because I thought it was a bit special and worth sharing,” said Gavin, who admitted that it would be crazy if he found the actual star of the photo.

“Yes, this is amazing. You have the beautiful scenery and this little gem in the background. Perfect ‘photobomb’ if you ask me.”

“Hope he finds the guy..that would be ace!”

And some were hoping that it wasn’t a morbid situation…

“I do hope it wasn’t someone jumping off the cliff that he captured and shared!”