The only holiday that matters is Fiona the Hippo’s first birthday.

Thanks to everyone who came out to celebrate Fiona’s birthday presented by Hippo Sak! The birthday girl even made a special appearance and enjoyed a hippo-friendly cake made by our zoo nutritionist! #fionasfirst #teamfiona #cincinnati #cincinnatizoo #closeenoughtocare

Here she is enjoying a hippo-safe birthday cake. YUM.

If you have a pulse, you know that Fiona was the best part of 2017, hands down. Or is that hooves down? We’re talking about hippos, after all. And I know that she has nothing but BIG plans for 2018. 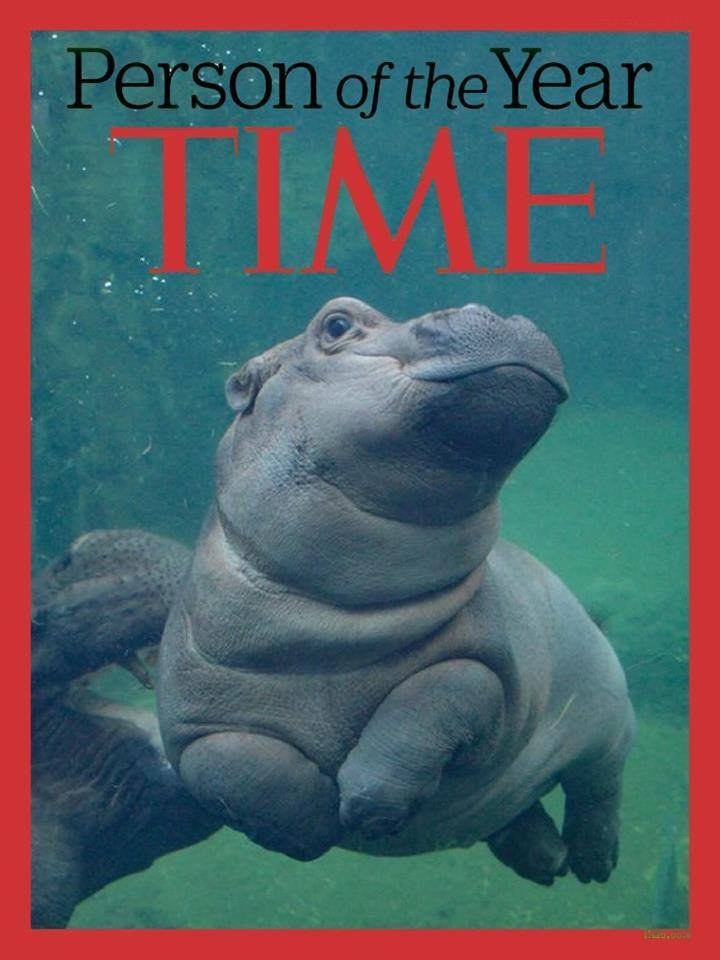 We almost didn’t make it this far. Fiona was born prematurely, and for a while it looked like she might not survive.

Hooray! Fiona continues to improve and gain weight. She's hit the 40lbs mark! Going forward we will not be doing daily updates but we promise to keep you informed of her progress on a regular basis. Visit cincinnatizoo.org for past and future Fiona updates. #closeenoughtocare #cincinnatizoo #cincinnati #teamfiona #hippo

But Fiona is a frickin’ SURVIVOR, and she persevered through her health struggles with the help of the staff at the Cincinnati Zoo like the true champion that she is.

Fiona weighed in at 166lbs this morning! She is consuming 360oz. of formula per day as well as some hay. #TeamFiona #fionafix #closeenoughtocare #hippo #cincinnati #cincinnatizoo

And since then, we’ve watched her grow up and cheered her on every step and shimmy along the way.

…hanging with her hippo family…

Family reunion! We've never been more excited about a post! BiFi (the power duo name that’s being used for Bibi and Fiona) was joined by Henry this morning for the first time. The three were introduced in Hippo Cove’s outdoor pool before the Zoo opened, supervised by their care team. The short introduction went well. Bibi intervened when Henry got too close to Fiona, which was exactly what we were hoping to see. Introductions will continue. There is still no set schedule for when Fiona will be out. When she is out, she has access to go inside, so visitors may or may not see her. Please be understanding if you visit the Zoo and Hippo Cove is closed off as the family needs time to get used to each other in the outdoor pool. #cincinnati #cincinnatizoo #closeenoughtocare #teamfiona #hippo #fionafix

Double chins are a good thing when you're a hippo! Fiona is up to 227 pounds today! #fionafix #cincinnatizoo #cincinnati #closeenoughtocare #hippo #TeamFiona

We are offering a special Fiona A.D.O.P.T.! If you A.D.O.P.T. Fiona between today and Feb. 7th you will be entered to win a one-of-a-kind Fiona "kiss" painting. ? (Yes, Fiona kissed the canvas!) visit cincinnatizoo.org to purchase your A.D.O.P.T.! The winner will be drawn on Feb 8th. #FionasFirst #TeamFiona #cincinnatizoo #closeenoughtocare #cincinnati

…or even just FARTING, Fiona has touched the hearts of countless adoring fans.

I’ve written about Fiona a lot, and given several interviews about her. The thing is, words don’t do her justice. She’s a ball of energy and cute as hell. She’s a survivor and she’s a social media sensation. But most of all, she’s a force of relentless positivity when we really need it most. She’s the sassy and gassy queen we need in these trying times — an unproblematic and unbothered ICON (and I know I use that word a lot, but I really mean it here).

And I just want to say, Fiona is as magical in person as she is online.

Had a BLAST hanging out with my fellow aquatic social media queen FIONA THE HIPPO this weekend. Sometimes you just have to book a last minute ticket to become an OFFICIAL member of #TeamFiona ???‍♂️? • • • (? @vstryker)

I made the trip to the Cincinnati Zoo with my mom and sister in October. The saying goes, «Never meet your idols,» but I’d beg to differ. Fiona is truly a ball of sunshine and flying across the country to Ohio was the best last-minute decision I’ve ever made. If you get the chance to visit this aquatic queen IRL, don’t hesitate. DO IT!

Here’s to another amazing hippo-filled year!

Nap time! Hippos are able to sleep both in and out of the water. They have the unique ability to sleep underwater and surface for air without waking up. Although Fiona is not demonstrating that ability during this nap, she does often snooze underwater. #TeamFiona #hippo #cincinnati #cincinnatizoo #closeenoughtocare #fionafix