A hairstylist named Kate Langman recently made major waves on the internet when she shared the touching story of a spectacular hair transformation she performed for a client in need.

Langman works in the salon at Ulta, the beauty superstore. Like the kind stylist who was sensitive to the needs of a young boy with autism, Langman took it upon herself to make her hairstyling services accessible to a woman she had seen in the store before, a woman who had explained previously that she often falls into bouts of intense, debilitating depression.

Depression is a mental affliction that we still don’t fully understand. Many people deal with low-level symptoms on a daily basis, while others may experience intense lows where they are unable to function for weeks or months at a time.

Langman’s client falls into the latter camp; she had fallen into a deep depression that lasted more than six months. In that time, she had essentially given up on grooming. As a result, her hair turned into a giant matted lump at the back of her head.

The woman had no idea how to fix her hair, but Langman was more than up for the challenge. 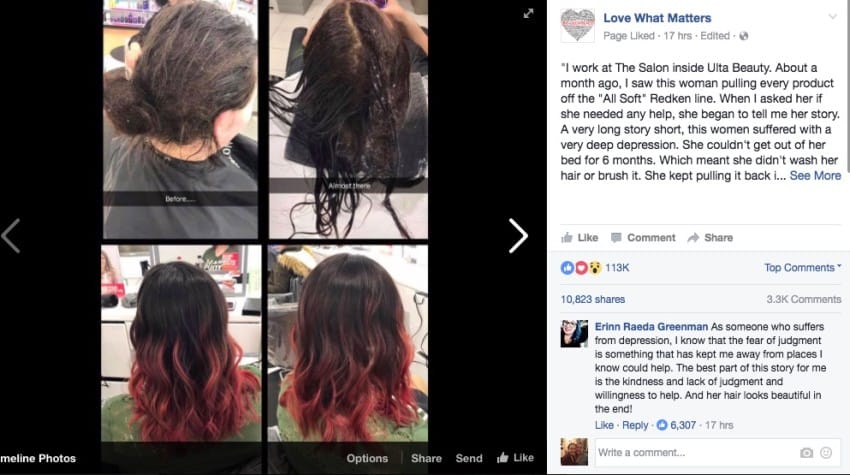 Kate Langman first set off ripples on the web in early March 2017.

The young woman, who works as a hairstylist, shared a powerful and beautiful story to her Facebook page about helping another woman transform her hair after an intense episode of depression.

The story was first shared to Langman’s personal page, where it attracted thousands of likes, comments, and shares. It spread still farther after being shared by Love What Matters.

Now, her words have been shared by nearly 20,000 people, and hundreds more have left comments applauding her actions. 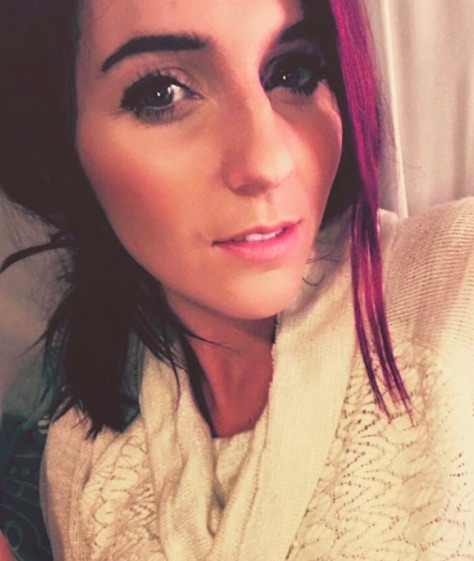 Langman, a young hairstylist, works at the salon inside of an Ulta beauty store. In her line of work, a typical transformation might be a short new pixie cut, or going blonde.

One day, Langman spotted a woman in the aisles of the store who was hoping to change her look, but also seemed like she needed empathy and friendship above all.

Scroll through to read about the encounter in Langman’s own words. 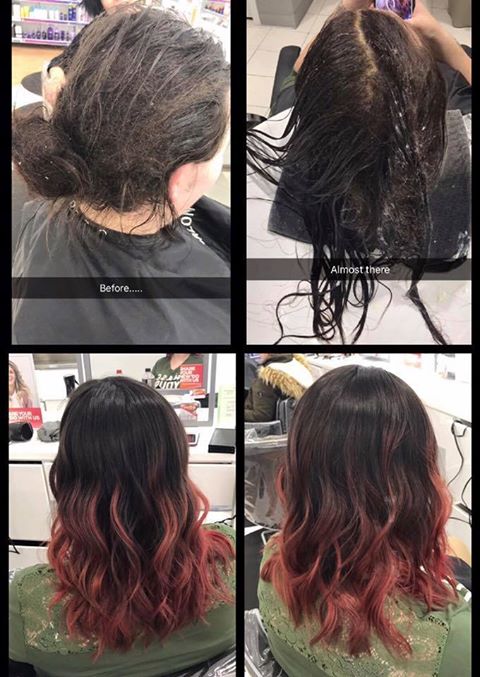 I work at The Salon inside Ulta Beauty.

About a month ago, I saw this woman pulling every product off the “All Soft” Redken line.

When I asked her if she needed any help, she began to tell me her story.

[In] short, this women suffered with a very deep depression.

She couldn’t get out of her bed for 6 months.

Which meant she didn’t wash her hair or brush it. 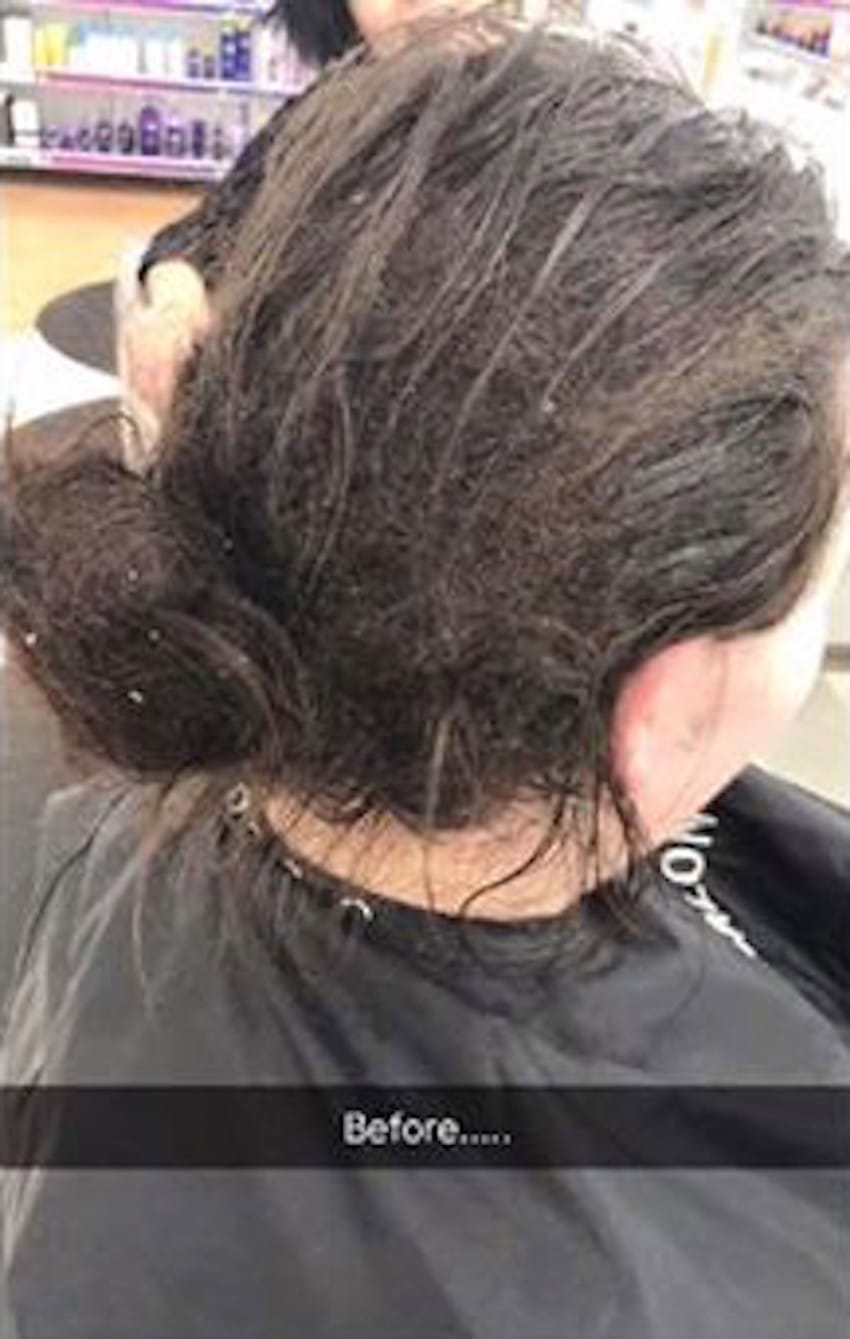 She kept pulling it back into this bun which after that long time turned into a huge dreadlock.

The bun was so matted that it felt like she literally had rocks on the back of her head.

This is when I mentioned to just put all the product back on the shelf.

We made an appointment for the following day and she didn’t show up.

She then called about 2 weeks later and booked another appointment.

And once again, no show.

At this point I figured she wasn’t going to ever end up coming in.

It actually, kind of, broke my heart. I wanted to help her so much. 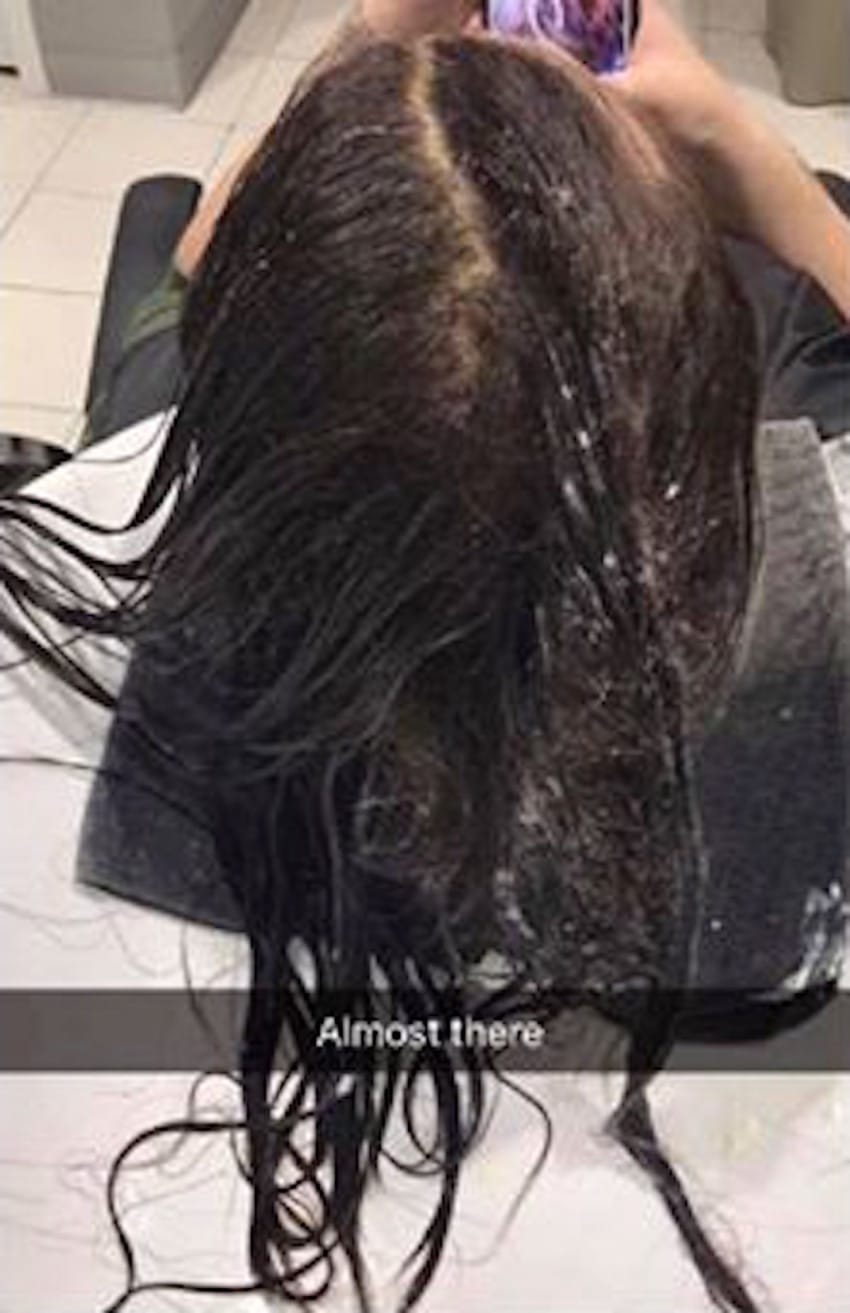 So today, out of alllll days, she comes walking in and asked if she can get her hair done today, and that she finally got herself out of bed again.

I didn’t care how late I stayed, I wanted to make sure she got taken care of.

She wanted to keep it on the longer side if it was at all possible.

But I wanted to make this work for her. 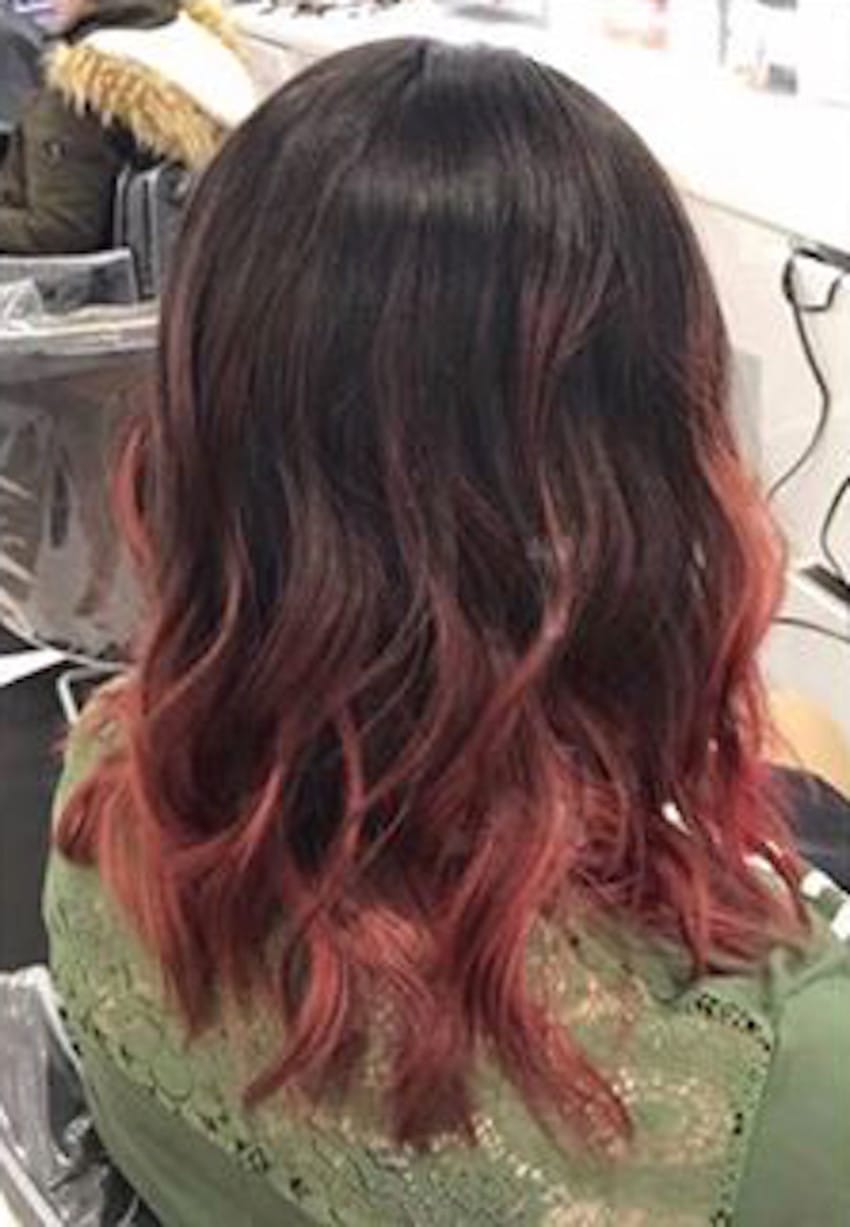 I wanted her to know how hard I was going to try to make her feel great again.

I explained to her prices and she said ‘I don’t care about the price, I just want to look like myself again.’

All of this time, I’m just telling myself to keep going.. that this is going to be all so worth it. 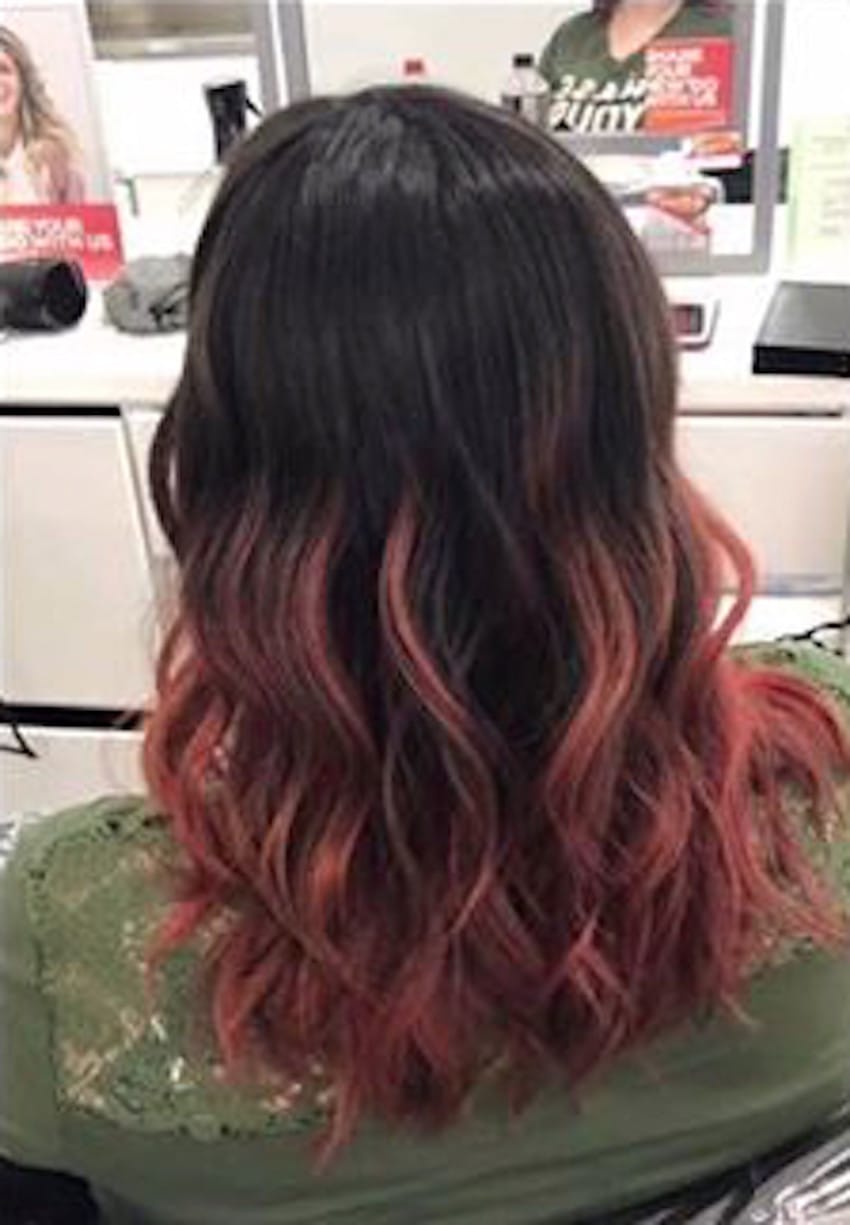 By the end of this service, I could see the sparkle in her eyes and I could see her cheeks get rosy pink from the excitement of not only being able to run her fingers through her hair again, but she felt herself again.

I changed someone’s life today and I’ll never ever forget it.

And if this ever makes its way back to her, I want her to know how great, wonderful, kind, loving, and how strong of a person she is.

And not only those things, but how beautiful she is..

she deserves nothing but happiness..

and I’m so thankful and so grateful I got to help with her first step.

Are you as touched as we are by Langman’s beautiful story?

Be sure to  Liked videoto celebrate this awesome stylist and her brave, beautiful client. Wherever she is, we hope she always remembers that she’s a superstar!