These days, it’s hard to find a spot on the planet that hasn’t been impacted by humans. Even out in the boonies or in some dark, dense jungle, you might see a road, a fence post, or some trash left behind.

Because of how far humankind has spread, it often finds itself butting up against places where wild animals used to reign supreme. BBC cameraman Gordon Buchanan encountered this firsthand when he witnessed an extremely rare silverback gorilla in the Democratic Republic of Congo.

After 20 minutes or so—and with a little help from the camera crew—the silverback finally ventured out into the road ahead. The reason he did so, however, left everyone stunned…

Even in the deepest, most dense jungles of the Democratic Republic of Congo (DRC), human civilization has frequently impacted the wildlife. BBC cameraman Gordon Buchanan knows this better than most, and he’s managed to capture a good bit of this conflict on film. 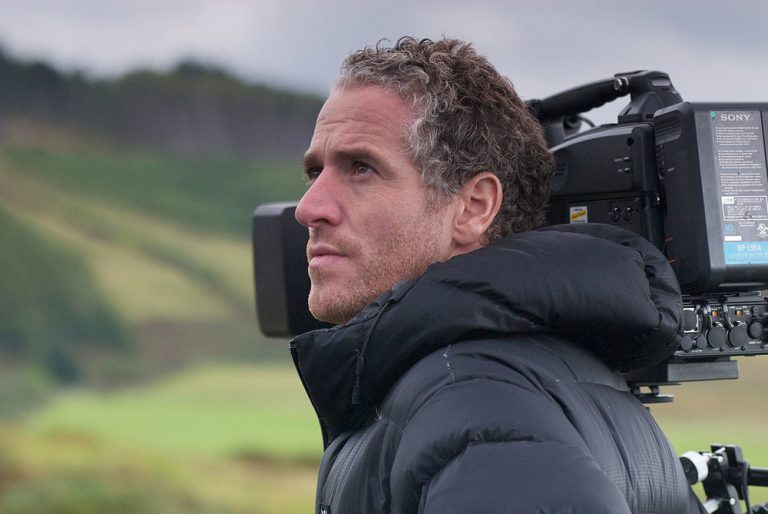 Recently, Gordon was in the DRC filming and studying some of the last remaining silverback gorillas on Earth. While doing so, he noticed one of his subjects waiting in the bushes along a roadside. Right away, his interest was piqued. 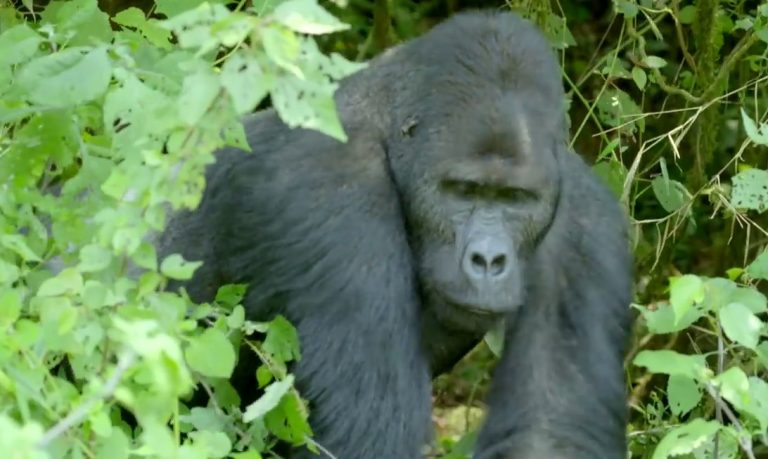 This was a fairly busy roadway, however, and Gordon knew trouble could be headed the ape’s way when he subsequently spotted a truck cruising down the dirt road. The gorilla remained in the bushes, but Gordon thought he seemed tense. Why was he so on edge?

For about 20 minutes, the ape watched and waited as truck after truck passed him by. What was he doing? Worried that something was wrong, Gordon and his crew stepped into the road to direct traffic. Soon after, they saw what exactly the silverback was waiting for… 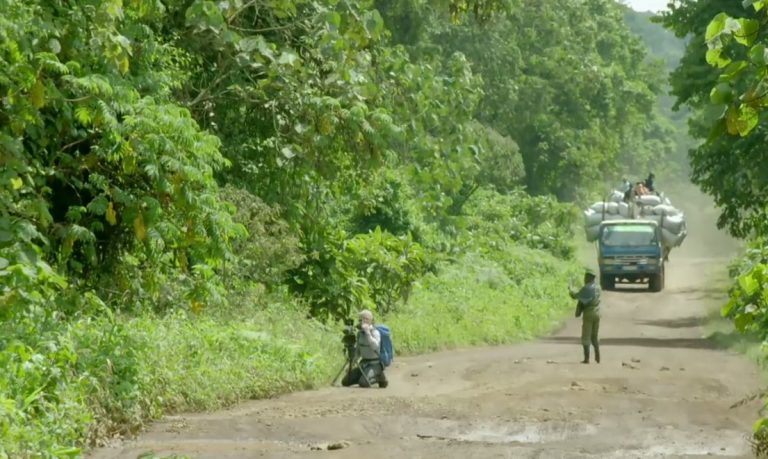 To better understand the situation at hand, it was important to know just who this particular silverback was. For Gordon’s part, this was not the first time he’d met this traffic-concerned ape. 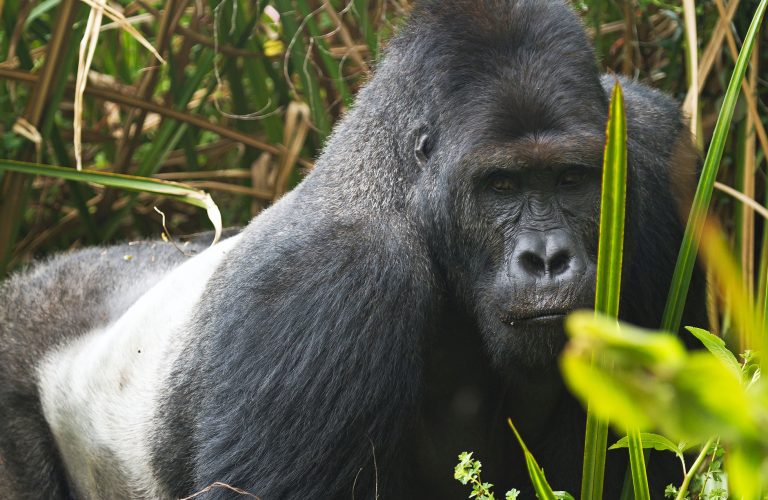 The silverback in question here—the one waiting so patiently in the bushes—had been a subject of quite a few filmmakers and studies. His name was Chimanuka, and he was estimated to be about 30 years old. 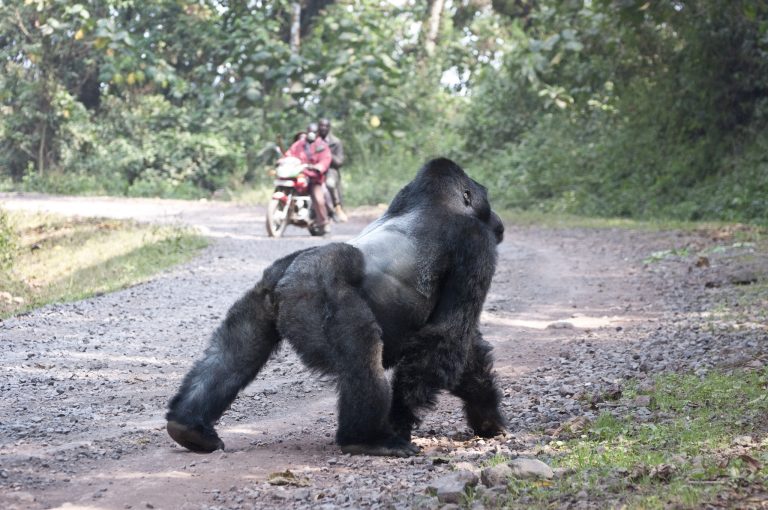 Many falsely believe the mighty silverback is the violent type: you know, a 1,500-pound muscle machine that could rip you in half with one arm. When it came to Chimanuka, though, that was never the case. 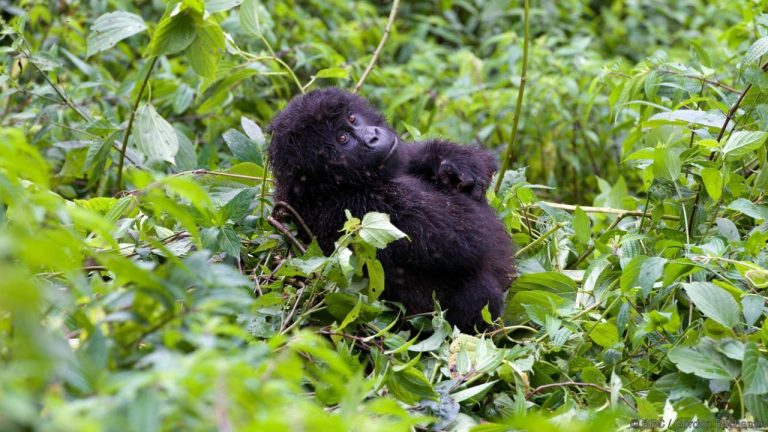 In fact, Chimanuka was known to be friendly with park rangers, tourists, and scientists alike. In one incident prior to Gordon’s traffic stop with his BBC crew, they’d seen proof that this silverback had a huge heart. 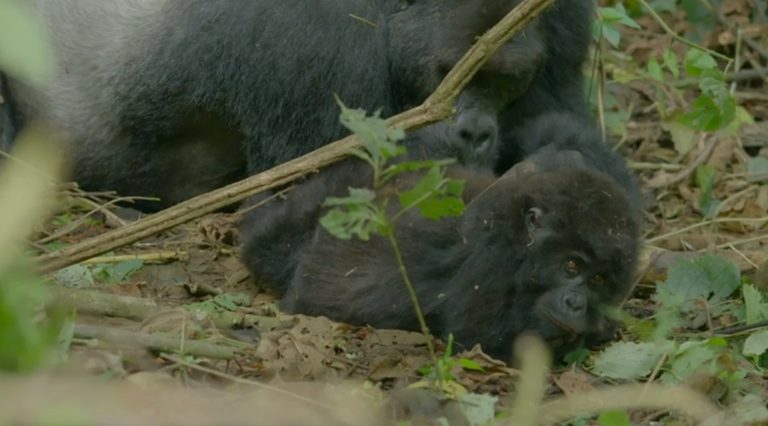 In that incident, which occurred in Kahuzi-Biega National Park, Chimanuka showed compassion not normally seen from silverbacks. After a baby gorilla was left orphaned following his mother’s death, the mighty Chimanuka started caring for him like a mother ape! 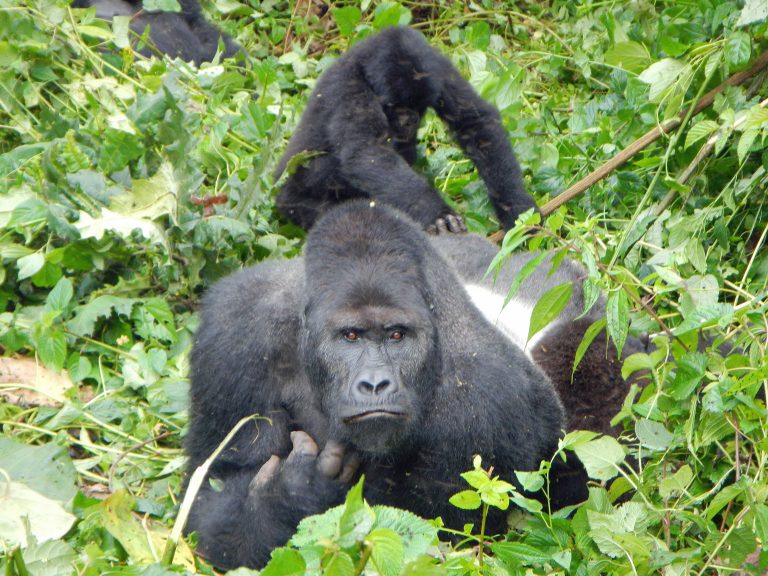 The baby, whose name was Marhale, was in dire need of a caregiver—so Chimanuka stepped in. He groomed the little ape and let him follow closely so that he could learn how to find food for himself. 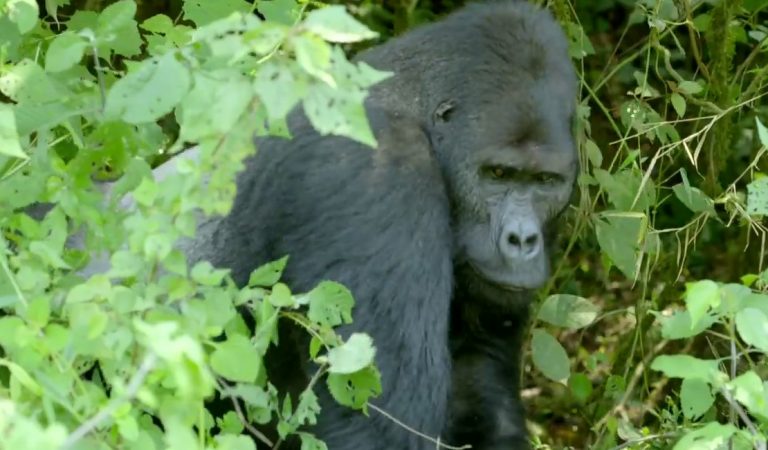 Though other male gorillas have been known to care for young, this was the only recorded example of Chimanuka’s particular subspecies, Bauer’s gorilla, acting this way. This sure was one unique—and generous—primate Gordon was studying! 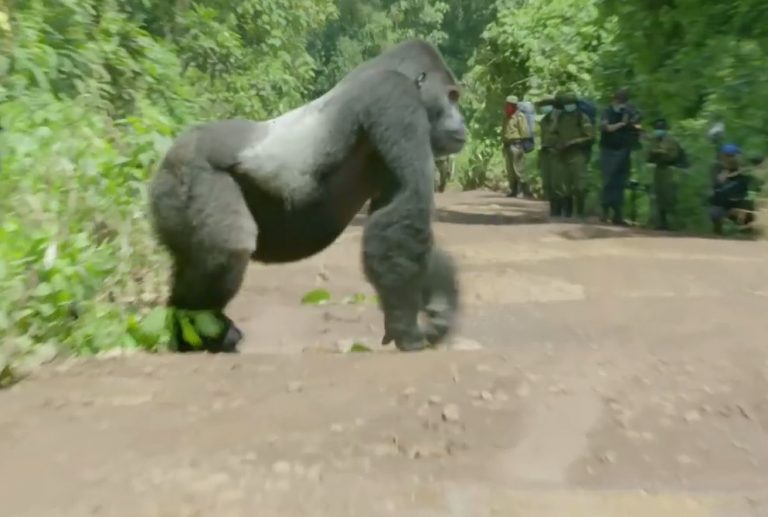 This was what ran through Gordon’s mind back on the roadside where Chimanuka remained, tensely, in the bushes. After waiting for so long, Chimanuka could finally act since Gordon and the BBC crew had helped him by stopping traffic. What was he up to? 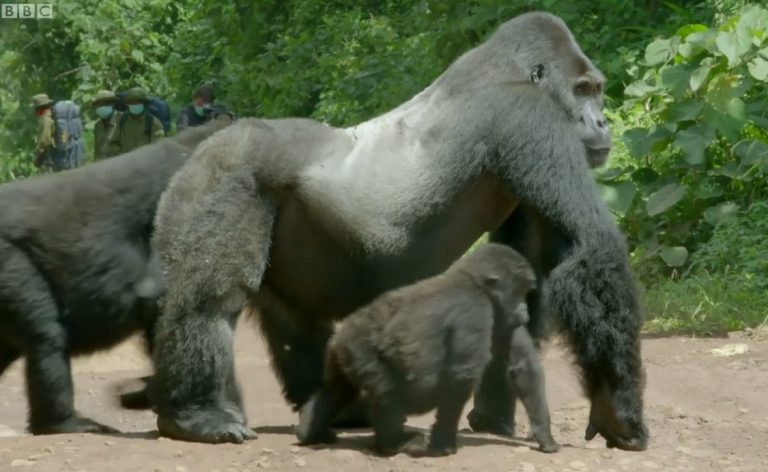 Slowly but surely, Chimanuka waltzed into the roadway. It seemed like he was on a very important mission—and as Gordon and his crew soon learned, he was! So, what was he doing in the road? 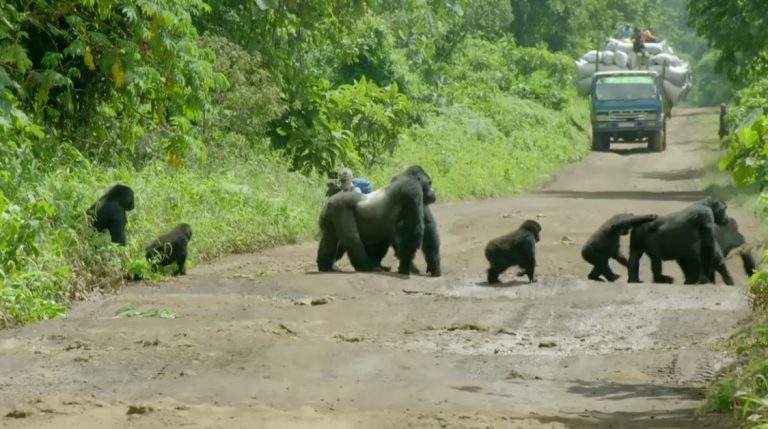 As it so happened, Chimanuka wasn’t by himself. He had his whole family in tow! Not only that, but he was waiting for it to be safe for them all to cross the busy road. He stood guard as each member ventured out the bushes and made his or her way to the other side.

Chimanuka had been nervous and tense because he needed to bring his entire family across the road. That included his adopted baby, Marhale; a one-handed ape named Mugaruka; and a few more mama gorillas and their babies. 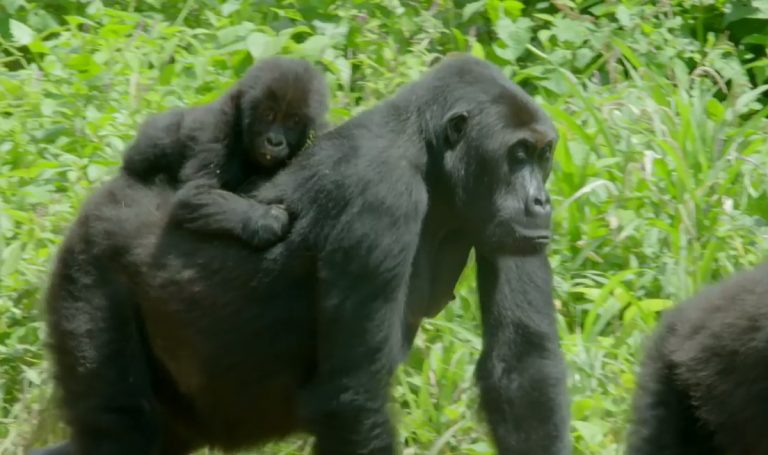 As he stood watch in the center of the road—like a glorious ape crossing guard—Chimanuka was ready to take a vehicle head-on if it meant protecting his family. Soon enough, they were all across the road and safe.

One mother gorilla named Mwinja carried her baby, Mwira. The little baby ape depended on his mother to get around, as he still wasn’t so graceful with his arms and feet! Obviously, Chimanuka’s watchful gaze was a big help to them. 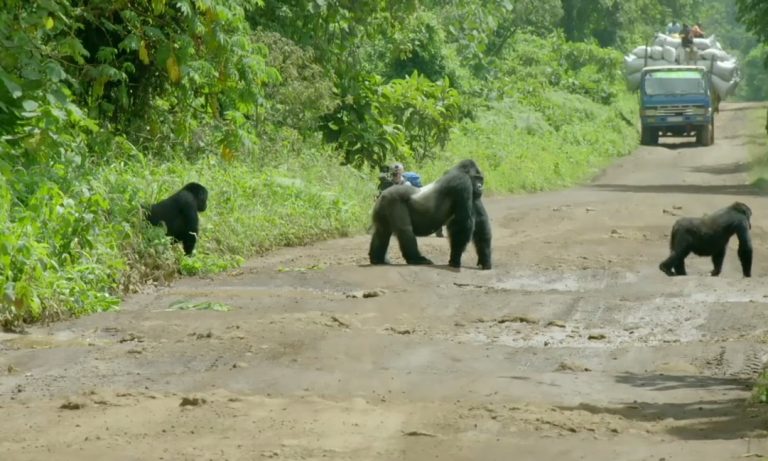 When the final ape crossed the road, Gordon summed up the scene quite nicely. “The boss,” he said of Chimanuka, “showing us that despite the road running through, this is still his jungle.” Even with human life so close, animal life continued. 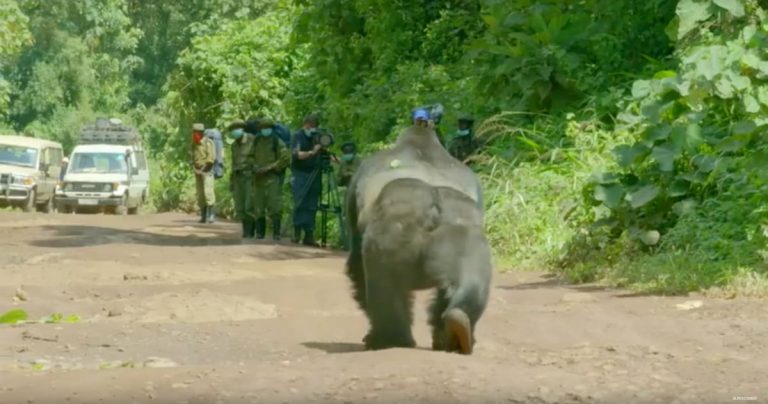 It was incredible to see such a large, powerful animal—one that may cause a bit of fear in onlookers—putting on such a display of caution and affection for his cherished loved ones. Chimanuka was truly a family man! 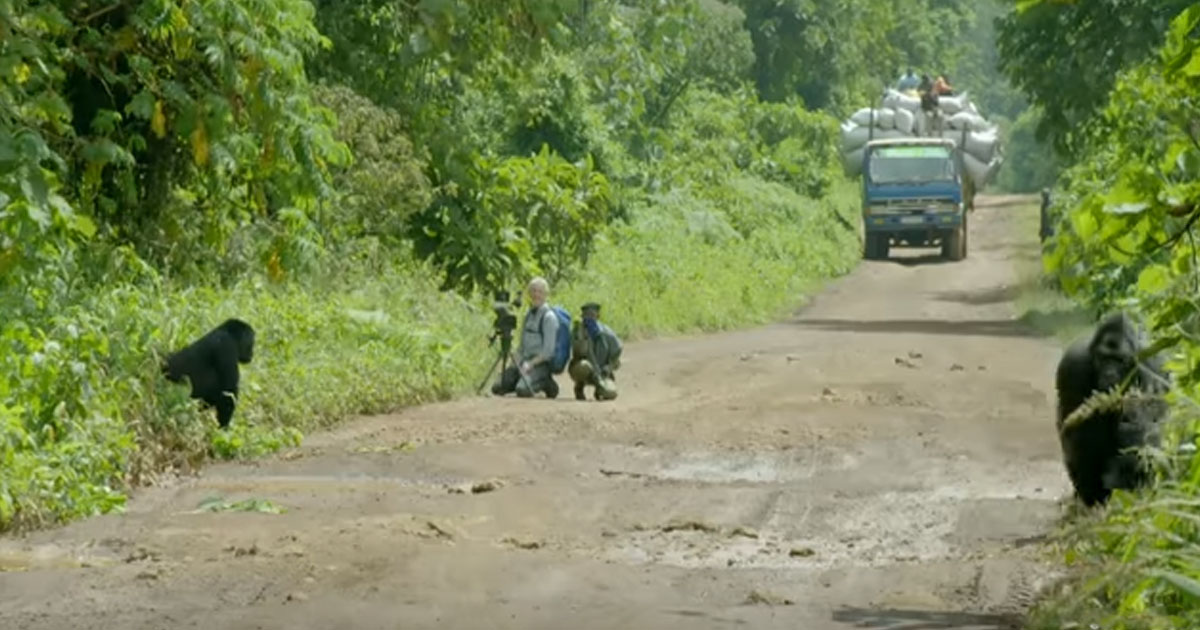 Just check out Chimanuka and his family as they carefully cross the road in this video. It’s easy to forget that, even among the largest animals in the jungle, love and compassion can still rule the day… 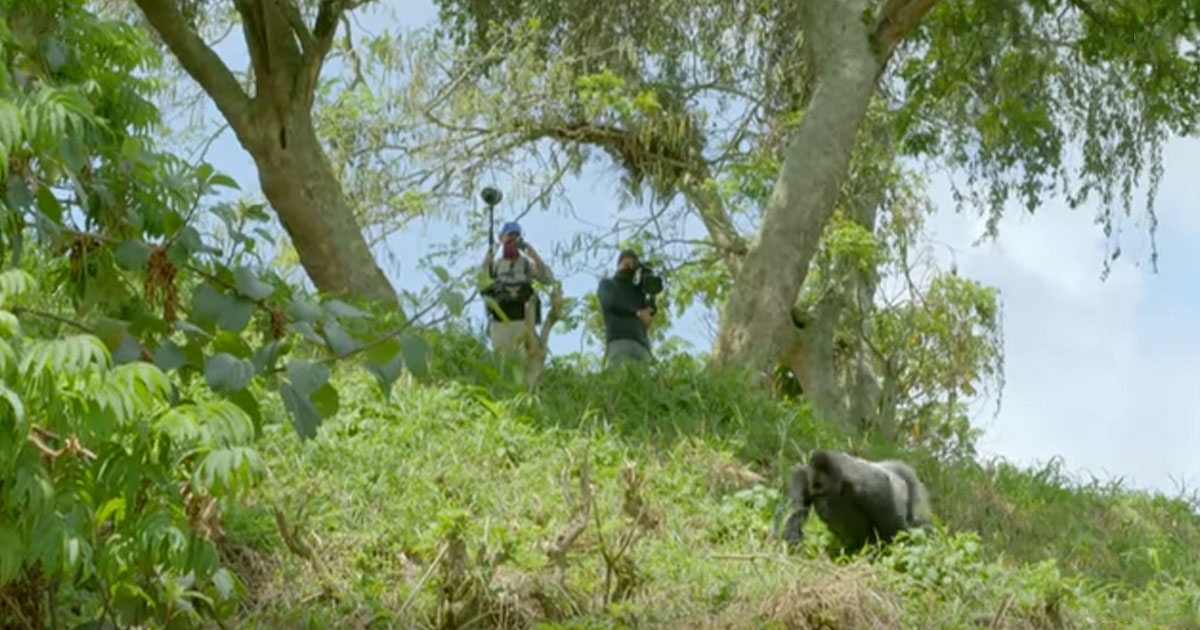 For more about these animals, check out Gordon’s documentary about Chimanuka and his family, The Gorilla Family & Me, on Netflix. Who knew such a big, powerful silverback could have a soft spot for the young gorillas in his care?

Liked Video this amazing silverback with your friends below!