The bond between a dog and its owner is a unique one that is hard to replace, which makes it all the more heartbreaking when a person passes away and leaves behind a beloved pet.

When a dog is a sole survivor there are usually uncertainties about who will adopt them. Sometimes, the next of kin is unable to take in a new pet for a variety of reasons. Regardless of how much their late owner loved them.

That almost was the fate of one pit bull named Leo- but then Katie Newhouser stepped in and saved the day.

Katie, is a UPS driver, the two bonded over the past 2 years. The pit bull would come out and greet her with kisses and a wagging tail every time Katie delivered a package to his house. Sometimes, Leo would even hop up into her truck while she was parked at the apartment complex. 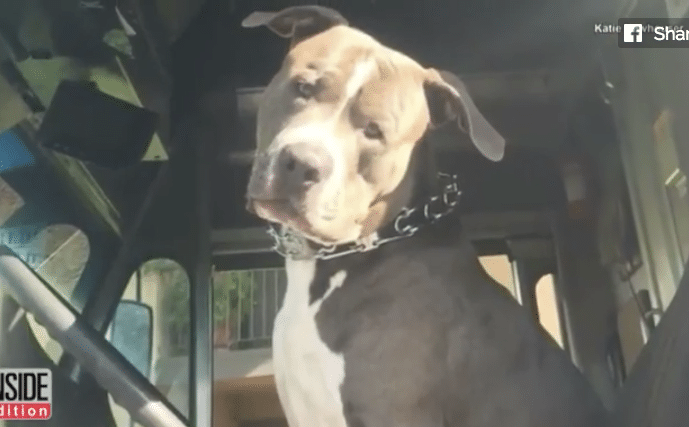 Sadly, Tina, Leo’s owner passed away unexpectedly leaving Leo without a home. The family didn’t want the responsibility of a pit bull while they were grieving. Katie agreed to take care of Leo during that time.

But what was meant to be a temporary arrangement became a permanent one. After Tina’s relatives saw how much Leo had bonded with Katie’s other five dogs and how happy he was with her they decided he should stay.
As of today, Katie reports that Leo is officially part of the family.

“He loves going for rides, the water, playing with his chew toys, tormenting his two feline sisters, laying in the sun, he has NO concept of personal space. Leo likes to be on us or right beside us! What a character,” 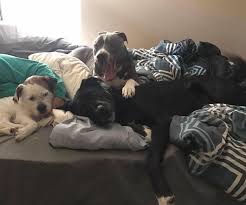 In spite of his sadness, Leo has come a long way and absolutely loves playing with his new dog siblings. While neither expected that this twist of fate would bring them together. It’s a joy to know their friendship has blossomed into a forever family.

“He has so much personality, you would think that he is human!” says Newhouser. “He is the sweetest, most lovable dog that you will ever meet. ”