“Once in recovery I was able to start asking ‘Is this me or Anna talking?’” Warning: This post contains sensitive images related to eating disorders.

Christie Begnell, 24, is a Syndey-based illustrator who began drawing visual representations of her anorexia while attending a private clinic. Warning: Some of the illustrations contain sensitive images related to eating disorders.

After a difficult breakup that coincided with family, work, and university struggles Begnell first began to notice symptoms of her eating disorder. “With my world falling apart, suicidal thoughts and self-hatred were at their peak,” she told BuzzFeed. “I had started dieting after gaining a bit of breakup weight but it very quickly became an obsession.”

Begnell collated her eating disorder illustrations in her book, Me and My ED. 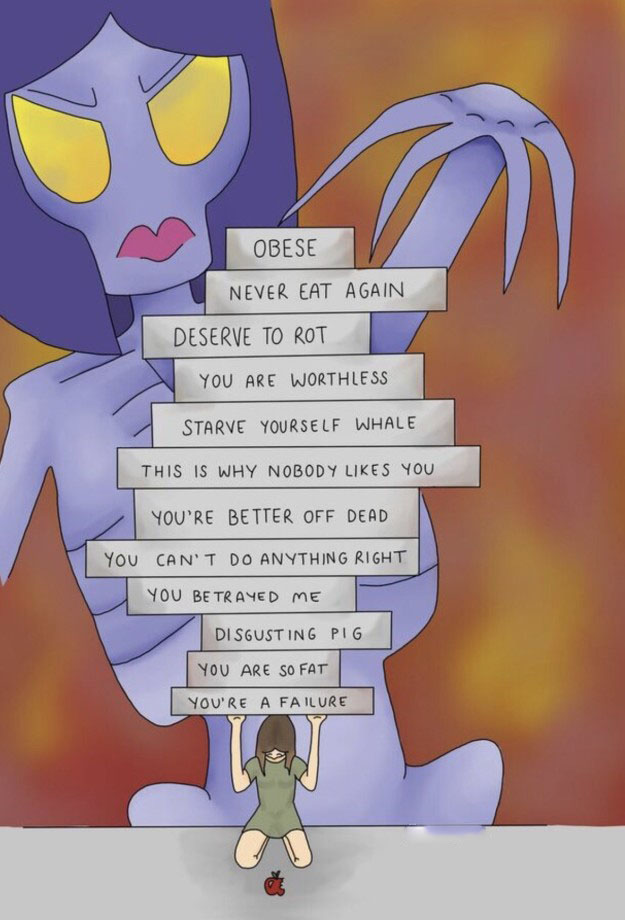 In her drawings, Begnell’s anorexia is personified by a character called Anna. 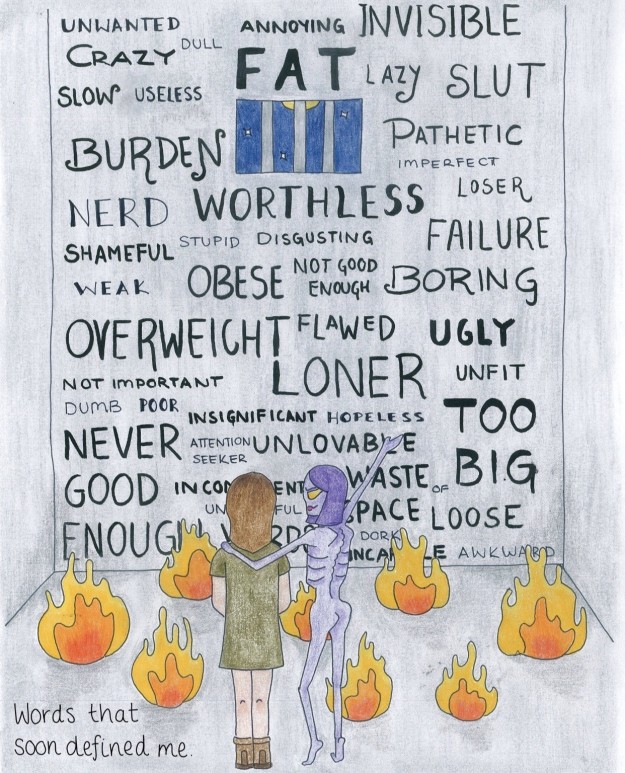 Begnell was inspired by the language of pro-anorexia forums where users tend to call their eating disorder by a name (often Ana):

In the depths of my illness it was difficult to know who was speaking because I had become so intertwined with Anna, but once in recovery I was able to start asking, “Is this me or Anna talking?

Keeping a visual diary has been massively helpful to Begnell: “The key is to not let what is happening in your head stay in there. The more we talk about our problems and seek help/advice, the more stigma is broken down.” 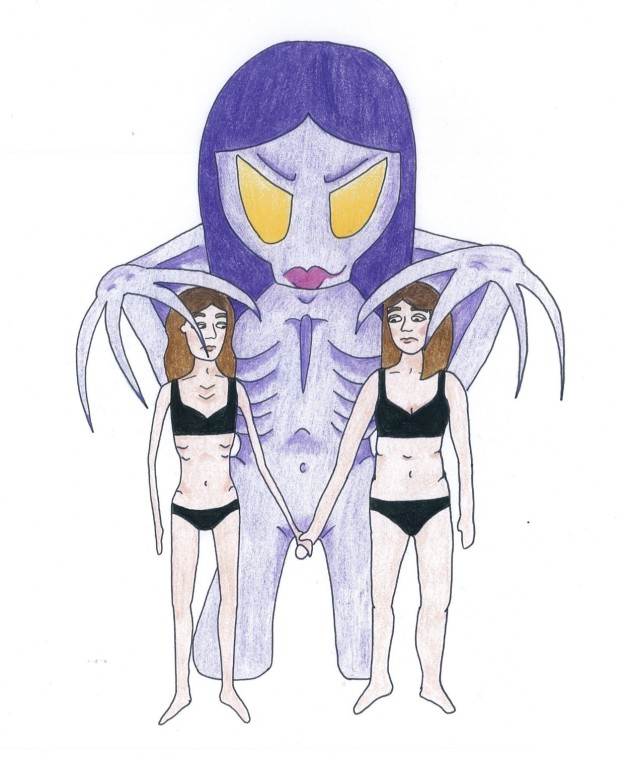 Her journey towards recovery hasn’t been easy. She was turned away from getting help due to her BMI being deemed “too healthy.” 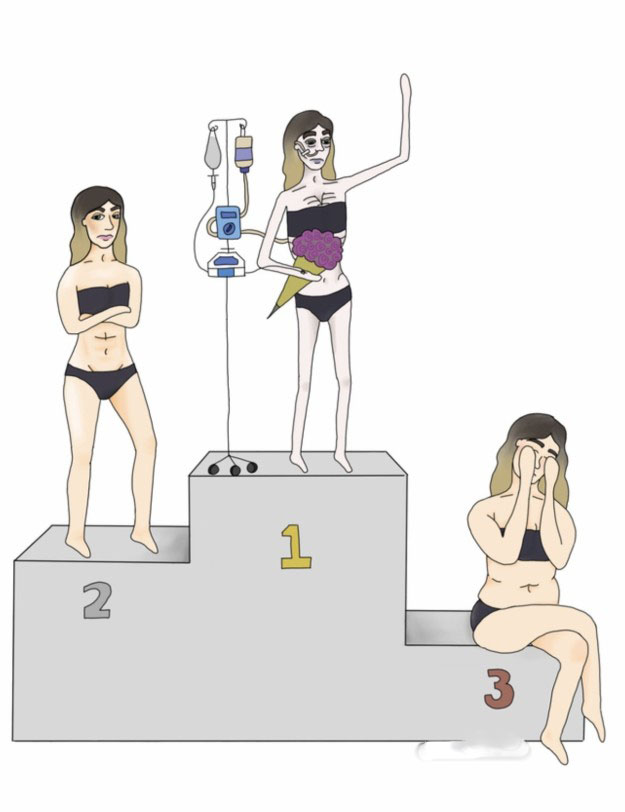 Following a relapse Begnell was sent to a short-term psychiatric unit after expressing chronic suicidal thoughts. The psychiatrist treating her was “not concerned with my weight as I was still within a healthy BMI range. One nurse told me I didn’t look anorexic and in the midst of a panic attack told me I didn’t have an eating disorder and should just get over it.” Eventually Begnell received access to intensive help through private health insurance.

Now that she’s in recovery, drawing helps her to manage her triggers. 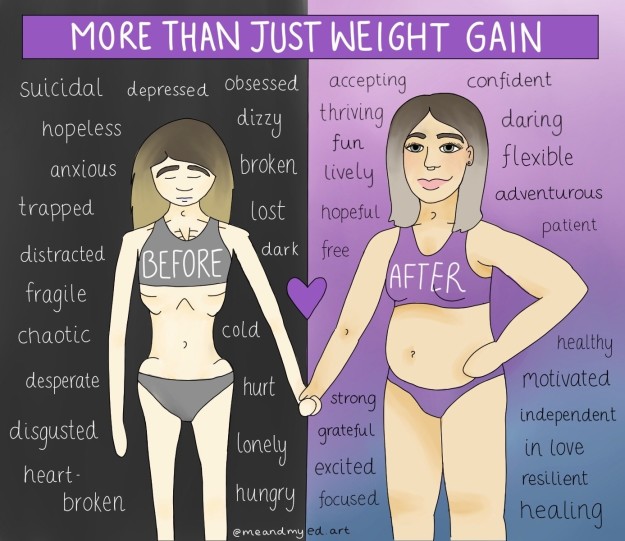 “When I was unwell I would let triggers snowball and turn into waves of urges to engage in eating-disordered behaviours, but now if I can’t talk it out or figure it out in my head, I draw it out. Then I take my drawings to my boyfriend or therapist and ask for their opinions. Also, if I’m now triggered by somebody talking about me or talking down to me, I stand up for myself and try to stop the trigger in its tracks.”

Apart from focusing on her current book, Begnell is continuing with her illustrations, hoping to put out a zine later this year. 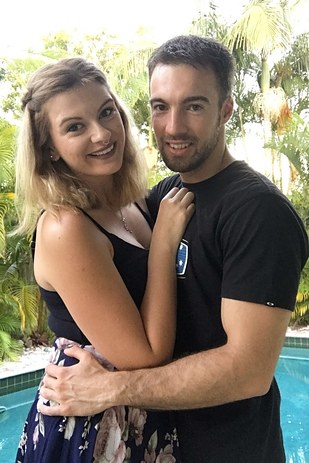 “I feel like there is such an important message that needs to be spread here and that’s that eating disorders are real, horrifying mental illnesses. I want to keep educating people and I want to keep helping people feel less alone. At the moment I’m just taking it all day by day and seizing every opportunity that comes my way.”

For more information on eating disorders and resources that can help, visit the National Eating Disorders Association or Beat if you’re in the UK.